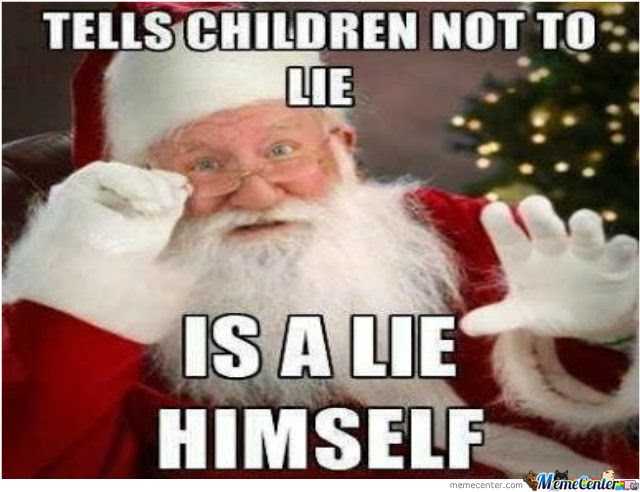 I never believed in Santa Claus. Not because I was some genius kid, but my parents just never fed me that BS. In fact, I remember my parents telling me not to believe kids at school if they said jolly old St. Nick was real.

They wanted all the credit for those gifts.

Thankfully, I never had to deal with the pain of realizing my Christmas gifts weren’t constructed at some elf sweatshop at the North Pole. But I started thinking recently… how many things do we believe now just because our parents told us they were true? I mean, I’m sure they had good intentions, but my mom was 12 years younger than I am now when she had me. Did she REALLY have a great grasp on the world at the ripe old age of twenty-one?

Sure, as a kid i thought my parents knew everything. So I bought into everything they taught me. It’s not uncommon, not is it unexpected. I do, however, also realize it could be done a better way.

I know some parents will say, “You’re not a parent! What do you know about raising children? Also you have an awesome blog!”

It’s true, I don’t have or want kids. But I was a kid once and I see how people have been molded by their parents. So I just wonder why we don’t teach kids to question more. I remember my parents found questioning to be disrespectful.

Mom/Dad, sorry, but “because I say so” isn’t a good reason for anything. Especially when it came to not letting me watch Married with Children. That show is tame as hell by today’s standards.

Questioning rules, beliefs, society and myself has brought me to a greater understanding about life and people. I’m not saying I know everything, but at least I know a belief doesn’t equate to truth.

This site uses Akismet to reduce spam. Learn how your comment data is processed.